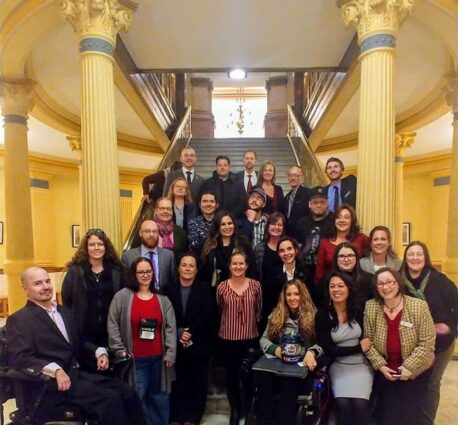 Becoming a cannabis activist and founder of a hemp oil company were not on Ashley Weber’s life goals list.  At 18 years old, Weber was already working full time in the emergency room at the hospital in Fort Morgan and studying to be a doctor. Growing up in Colorado Ashley was riding and roping horses and entering barrel racing competition. A drunk driver speeding down a country road changed her life path. Her neck was broken. Ignoring Ashley’s pleas not to move her, the drunk picked her up “like a sack of potatoes.”

A licensed marijuana patient and cannabis advocate, Ashley included MMJ-related payments records with her medical receipts when she renewed her federal housing voucher. It was 2012 and medical marijuana was legal in Colorado. It was Federally illegal.

She reached out to the Boulder Weekly and other local media. 9News Denver picked up the story. A two year legal battle began.

Ashley became the spokesmodel for KeefCola, representing them at the 2013 Cannabis Cup Denver. She began working with MDherb, a patient education and advocacy group which includes a comprehensive resource of medical reviews and commentary, a state law directory, information on medical cannabis strains, current articles and blogs from industry thought leaders. Ashley joined the founding board of the Women’s Cannabis Chamber of Commerce and serves as the Executive Director of Colorado NORML. She is also the Chapter leader of Parents 4 Pot Colorado. She is the President of “Great Plains Hemp Cooperative” servicing the Northeastern Colorado region.

If Ashley’s schedule sounds busy, add to it a single mother and business owner.

Ashley is the founder and owner of thehila  high cannabinoid spectrum CBD oil.

.theHila means “love” in the Lakota language.  3% of sales are given back to The Lakota Nation at Pine Ridge Reservation in South Dakota for Alex White Plume & Family.

Her heart has always been in healing people leading her to develop an extensive CBD line. .theHila includes a cosmetic line, as well as, personal grooming products for men. The AHA Aftershave Splash and Beard & Moustache Hempin’ Styling Balm are two of the most popular products.

“We offer a full spectrum cannabinoid test result with each order. Tested at Rm3 Labs, grown tissue culture, in house using NO pesticides, and Extracted with a patented technology system using an ancient alchemic method rediscovered utilizing H2O and a medium of kosher Organic coconut oil.”

The bio on the Colorado NORML best describes Ashley:

This is a Women Cultivating Success and “legit OG.”